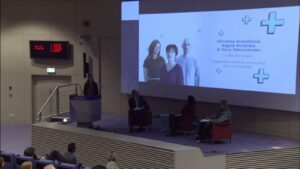 The European Commission celebrations of 30 years Erasmus+ were launched on 26th January. We are happy to say Varna University of Management was part of the events, representing Bulgaria’s involvement in the La MANCHE project. The event was started by Tibor Navracsics, European commissioner of Education, Culture, Youth and Sport. He introduced Erasmus+, one of the most successful European programs, to the journalists and guests at the press conference at the beginning of the celebratory events.

The event began with examples of the astonishing results achieved in education. The first of which was the successfully completed project La MANCHE, coordinated by VUM in partnership with 27 other universities from 10 countries. The results of the project, connected to modernizing education were demonstrated with a video with the participation of VUM’s very own Christina Armutlieva, coordinator of the project.

“After the end of the press conference, we were invited to the European Parliament for a meeting with commissioners, guests and journalists. There we had the chance to share more about our successful project. The celebration campaign for the Erasmus+ anniversary aims to show the positive results of different initiatives supported by the program in various fields and levels of education. They are all connected to internships, volunteering and studying in Europe. We are proud we were presented as a positive example and were the only Bulgarian university invited to the opening of the event.”, said the head coordinator of the La MANCHE project, Christina Armutlieva.