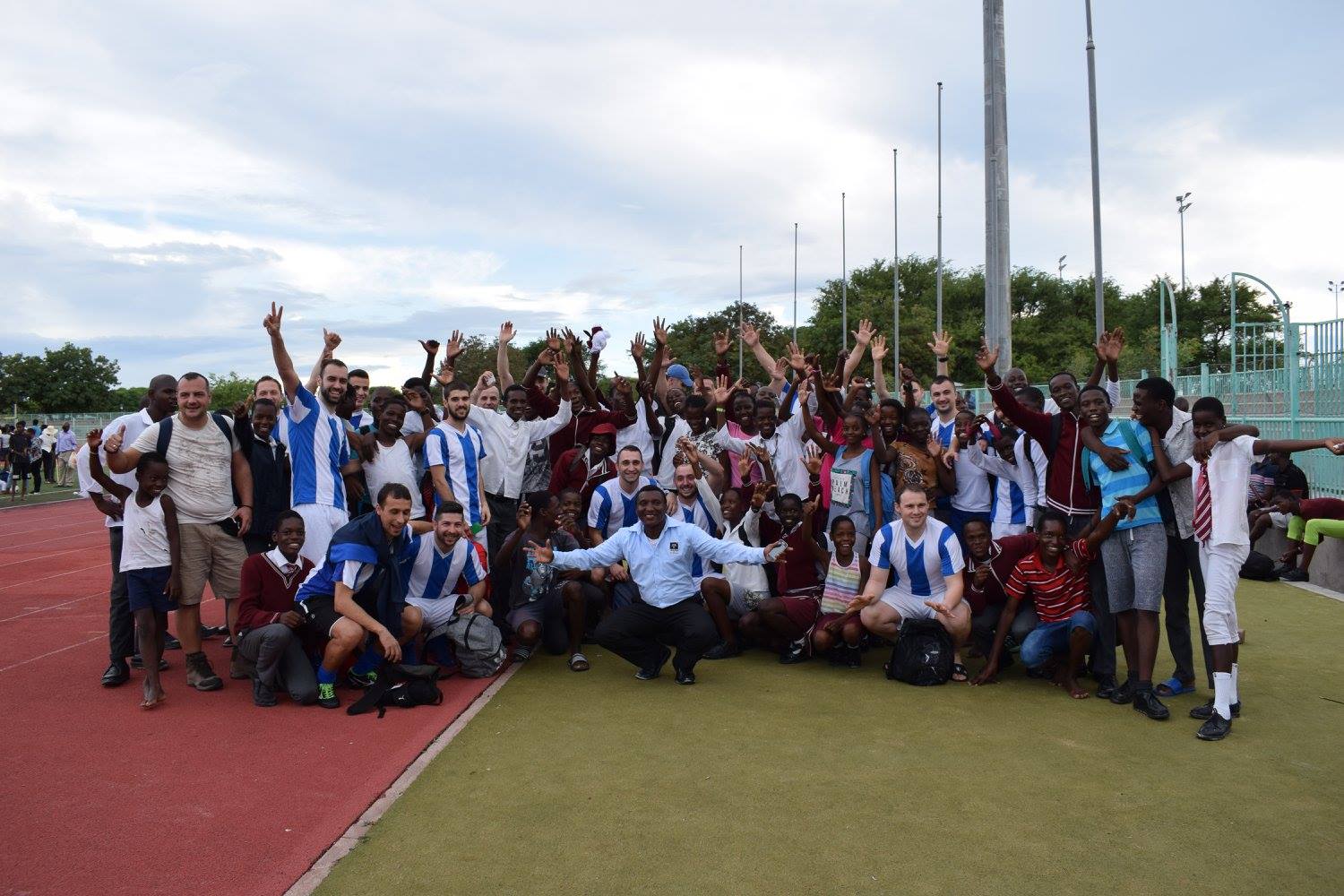 An International Academy “Reaching and Empowering Communities through Sport” was organized in Maun, Botswana in the period February 27 – March 8. The Academy included representatives from 4 countries from 3 different continents – Europe (Bulgaria), Asia (Turkey) and Africa (Zimbabwe, Botswana). Bulgaria was presented by 20 youth workers and 3 trainers from Association Football Club Inter from Dobrich, which was created under Varna University of Management initiative. FC Inter is the leading organization in the initiative, and the host was association Poetavango from Maun, also known as “the door” to the well known Okavango river delta.
The event was implemented in the framework of the project “Sport for Community Regeneration and Empowerment: Integrating Sport Event Management into Youth Work for Enduring Social Impact” (Score), which is implemented with the financial support of the Erasmus + Programme of the European Commission, Contract No 2016-1668/ 001-001. The Project was inspired by the story of a local Botswanian football team – Sankoyo Bush Bucks, which is a great example of how football contributed to the integration of the local community. The team was established in 1996 in a small village with population under 500 people (most of whom from minorities), torn by tribe conflicts. The team gathered at one place young people from different tribes for a common game, and then the inter-community conflicts and lack of trust between families were overcome. This marked the beginning of a united and stable local community. Now the team plays in the Botswana Premier League.
Inspired by this example, the project partners organized an International Academy, which trained youth workers for 8 days in sport events management through which they could promote and affect the local communities on different social issues. The study program of the Academy included theoretical knowledge in the field of Sport events management, social impact through sports, Social entrepreneurship and innovations, that were combined with practical trainings and workshops.
Some of the youth workers from Bulgaria shared a little about their experience in Maun, Botswana – “We are impressed by the motivation for sports of the local children. After our first meeting with them, we were impatient to do the next trainings. At some of the practical games, when we came to the sports field, at the beginning only five or six kids joined us, but after a while there were dozens. Many of the children did the exercises with us, even though they were bare foot because they cannot afford any shows. Before we left some of the youth workers gladly gave their sportswear and shoes to the children… We were impressed by the skills of one young girl from Zimbabwe that was our goal keeper in one of the games – she did not let a single goal and held herself like a true professional.”
The participants and the local people who came to the event were also introduced to some of the Bulgarian traditions and customs – the martenitsa, the horse races for Todorovden, and on March 3rd they were told about the National Holiday of Bulgaria. In the framework of the specially organized four football workshops for local schoolchildren (including some from disadvantaged groups), the youth workers from FC Inter promoted social inclusion, anti-discrimination, tolerance, and also demonstrated professional methods for football trainings, game techniques and tactics. More than 700 people – young and adults with interest in sports were involved in the activities during the academy and had the opportunity to enjoy the friendly atmosphere, sharing of good practice and mutual education.
You can find more information about the SCORE project on this website: http://score-project.info